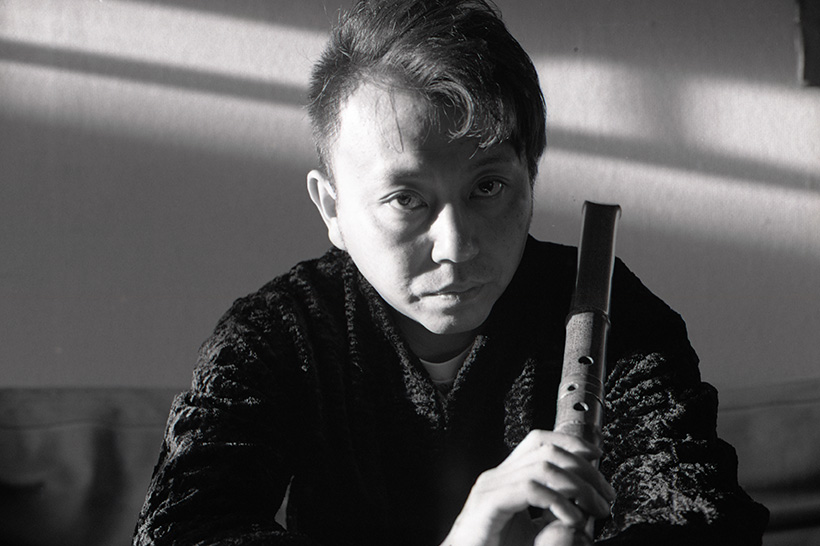 Born in 1971 in Negishi, Tokyo.
He was raised in a family of traditional performers, and his grandfather started the line of ‘Sato Kinsui’ and his legacy continues on through a school of Japanese traditional bamboo flute called ‘Kinko-ryu Shakuhachi’. Kinohachi began playing with the shakuhachi as a toy at 4. In his twenties he studied under Kifuu Mitsuhashi (a Shakuhachi master player who was awarded the Medal of Honor with the Purple Ribbon in 2011). He has performed on many stages both in Japan and abroad with his master. He is also a member of the rock band ‘Musashi’ which is a fusion of traditional Japanese and Western instruments. He made his solo debut in 2003 and his music has appeared in anime, plays and on television networks such as NHK (Japan Broadcasting Corporation). In addition to his regular domestic and international appearances, he does memorial performances in places such as Chernobyl and Chiran.

He has also committed himself to the campaign of ‘Mirai Minyo Project’ passing down ‘Minyo’ to the future generation 100 years from now. ‘Minyo’ is a traditional type of spoken Japanese folk song and dance that varies from region to region. Kinohachi continues to learn about Japanese tradition in order to preserve the soul of Japanese culture and pass it down to future generations and people the whole world over.

Performances and Lives in Japan and abroad